diamondbellamin_1990
Books of the Apocrypha

Scholars claim that 1 Esdras is, perhaps, the least read book of the Apocrypha. The reason seems to be that most of its material can be found in either 2 Chronicles, Ezra, or those parts of Nehemiah that refer to Ezra (see list below). The book covers a period of time from the seventh century to the fifth (or possibly fourth) century BCE. This was a time of major upheaval for the Jewish nation. Josiah was king of Judah. The Assyrian Empire had dominated the region for over a century, but was on the decline and would soon break apart. It would be replaced by the Babylonians, who would conquer Judah, destroy the temple at Jerusalem, and take many of its citizens into captivity. These events are known to have occurred during the years 622-587 BCE.

It wasn’t long, however, before the Persians replaced the Babylonians and became the dominant power in the region. Their policy was much different from the Babylonians. Cyrus encouraged the Jews to return to Jerusalem to rebuild their city and temple. Much of this work was brought to a climax by Ezra. It is unknown exactly when Ezra did this. Some scholars think a century or more might have passed between Cyrus and Ezra; others think the time was much shorter.

1 Esdras selectively reflects on some of the more important religious implications of these events. The book begins with Josiah’s reforms and the re-institution of Passover and ends with the reading of the law by Ezra.

The following list indicates how these verses line up. This is not to suggest they are written word-for-word. 1 Esdras has only been found in Greek; the others were written in Hebrew, yet the gist is the same. Scholars believe that 1 Esdras was probably translated from the Septuagint, which would indicate it wasn’t written until a much later date. Indeed, its vocabulary has a lot in common with documents from the second century. It clearly is more of a reflection on events, rather than a description of what is happening at the time it was written. Some scholars think it might have been written in Egypt, but that remains speculative.

It is obvious from this list that only a few verses are unique to this book. Interestingly, those verses describe an event that occurred in the court of King Darius. Apparently, one night after he had gone to bed, three of his bodyguards held a contest to determine “what one thing was the strongest.” The winner of the contest would be richly rewarded by the king. Each one wrote his answer, sealed it, and placed it under the king’s pillow. The king and some of his wisest advisers would decide which answer was the best (3:1-12).

The first bodyguard wrote “wine,” the second said “the king,” and the third said, “Women are the strongest, but above all things truth is the victor.” In the morning each man was given an opportunity to explain his answer (3:13-17a). The first guard claimed that wine could lead minds astray and cause all sorts of problems (3:17b-24). The second man firmly believed that the king was stronger than wine because the king not only ruled over others, but he also could take what others earned or grew. Plus, his subjects had to obey him and do whatever he wanted (4:1-12). The third guard, who happened to be named Zerubbabel, mentioned that women give birth to kings – as well as to everyone else. Men will do whatever a woman wants, often risking their own lives (4:13-27).

And even though this third answer seemed to trump the others, the fact remains that even women are subject to truth. Truth is the only thing that endures, and it will prevail forever (4:28-41b). After this explanation, Zerubbabel was declared the victor and the king promised to give him whatever he asked. It is at this point that Zerubbabel asked to return to Jerusalem to rebuild the temple and to return the holy vessels that had been stolen by the Babylonians. The king granted him this request and promised safe passage for all those who accompanied him. Additionally, those who went would not have to pay tribute and Darius would provide wages for those who helped him. He ordered Judah’s neighbors to help with the costs. Needless to say, Zerubbabel praised God and thanked the Lord for giving the king such wisdom (4:42-63). The king also provided a large escort, with the priest, Jeshua, and Zerubbabel at its head. The people marched in an orderly fashion, making this a religious procession (5:1-6).

But this leads to some historical difficulties. Extra biblical sources have determined the sequence of the Persian kings as follows: Cyrus (d. in 530 BCE), followed by his son, Cambyses (530-522), followed by Darius I (522-486), followed by Xerxes (486-465), followed by Artaxerxes I (465-424). 1 Esdras begins with the mention of Cyrus and ends with Darius. Nonetheless, other events in chapter 2 refer to the reign of Artaxerxes. The author talks about Cyrus in chapter 5 even though the reign of Darius had been established in the court tale previously discussed. Zerubbabel is given authority by Cyrus even though the events described earlier with the three bodyguards occurred during the reign of Darius. Rebuilding efforts are hindered twice in Darius’ reign, when most scholars believe it happened once with each Cyrus and Darius. Obviously, the author was not interested in writing an accurate history.

What, then, was the purpose of this book? Most scholars think it was to reflect on the events leading up to the restoration of the temple. More importantly, however, it was to elevate the leadership of Zerubbabel (at the expense of Nehemiah). The use of a court tale to establish the success and authority of Zerubbabel echoes the story of Nehemiah and the king. Nehemiah, as cup bearer, had a close relationship with the king; so did Zerubbabel. Notably, Zerubbabel is also of the line of David and is commended in the writings of Haggai and Zechariah. Maybe the whole point of this book is to affirm that the Davidic dynasty had not ended. Zerubbabel, in leading the restoration of the temple, was, in a sense, the restoration of David’s line as well. He, then, becomes another celebrated ancestor of Jesus, which would have been very attractive to early Christians.

1 Esdras also elevates Ezra to the office of high priest, a point that is not made in the books that bear his name. In 1 Esdras, Ezra alone fulfills this function. In the canonical books, he shares this moment with Nehemiah. Ultimately, it is the author’s interest in the temple that sets this book apart. From the opening lines about Passover to the reading of the Law, this book highlights the holiness aspects of the cult. In 1 Esdras, readers glimpse the way in which Israel reconstituted itself after the destruction of the temple and the loss of its kingdom. The rebuilding of the temple was the cornerstone for reinventing its identity. The genealogical lists contribute to this sense of identity by determining the boundaries for the group. It comes as no surprise, then, that Ezra would prohibit any intermarrying with non-Jews. Since the idea was that the restored Israel would be contiguous with the pre-exilic Israel, bloodlines had to be purified; pedigrees were important. In this way, the Israelites could set themselves apart from the rest of the world and reassert their unique covenant with God. 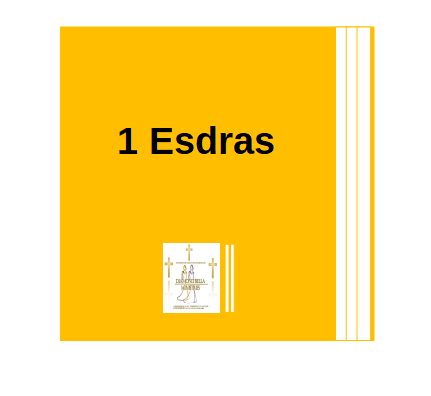